A common misconception is that Tantra is a spiritual approach to sex or else a modality of sexual healing, but the reality is that Tantra is much more complex than the confines of these two explanations will allow.

Many explanations of Tantra focus on Tantric secrets that will unlock mind-blowing sex or else the elusive secrets to boundless sensual appeal. It’s true to say that the first thing most people think of when the word ‘Tantra’ is uttered is sex. Indeed, from the first tales of Tantra practices reaching the West, we have been struggling to separate fact and fiction to reach a true, balanced understanding of what Tantra really is. 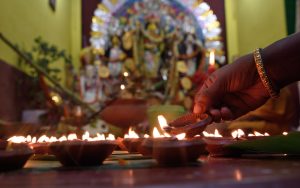 Perhaps, the issue is that Tantra has a diverse range of meanings and teachings. As such, it’s best not to try and understand Tantra as a single philosophy, teaching or journey, but to accept that it’s an elaborate set of teachings and practices. These are drawn on intuition and natural energy cultivation, interlaced with many spiritual paths and cultures; culminating in the essence of Tantra being present in many other authentic spiritual paths including Taoism, Buddhism, and Kabbala.

To begin understanding the heart of Tantra, we need to begin examining its history and the story behind its existence. If we were to accept the commonly peddled story of Tantra, then we would understand that in ancient India there existed a Tantric faction which, unlike the straight-laced, dualistic Western spirituality, embraced sexual energy and sensuality.

The real story behind the history of Tantra, however, is more complicated. Tantra arose as a reclamation of practices that had been excluded or diluted in Orthodox Vedic Hinduism, the mainstream Yoga traditions, and traditions such as Buddhism and Jainism.

Tantras during this period were a type of esoteric text which arose in different Hindu lineages beginning in the fifth century. The word tantra came into use at a time when Buddhism, Jainism, and the various Vedic traditions that we now refer to collectively as Hinduism were dominant in India.

A core part of each of these modalities were sutras, which could be termed key texts or teachings. Undoubtedly, the most infamous sutra is the Kama Sutra, swiftly followed by the Sutra of Patanjali. Sutra simply means “thread”, as in a ‘thread of thought’, or in the case of sutra’s: a sequence of thoughts and interconnected ideas.

To be clear, sutras were originally books that presented teachings, ideas, and concepts, while tantras were teachings passed through physical and verbal instruction from teacher to student. However, what we may now refer to as teaching aids soon appeared to provide written support for the oral teachings of the tantras.

The birth of tantric teachings

Originally, teachings recorded in tantra’s were not interconnected and presented varied practices and wisdom. However, this was set to change in the sixth century as practices with origins in the Kashmir valley swept India. Ancient religious traditions worshipping Śiva and Śakti and of ‘weaving together’ Śiva and Śakti were passed orally from teacher to student. So, by tradition, this required a direct teacher-student relationship — not just the revision of written teachings.

There was no strict hierarchy and it was not supportive of the caste system, making it popular with the up-and-coming wealthy middle class, which by and large left out of the caste-conscious religions of Vedic origin and the monastic-male Buddhism.

As such, tantric teachings were less restrictive and, unlike the well-established and scholarly traditions, were vibrant, embracing life, sex, and both genders. They promoted joy and bliss in this life and that enlightenment was open to everyone; in this life without discrimination.

This concept of immediacy and of not having to wait for re-incarnation was deeply appealing, as was the fact that these teachings embraced life and took the whole person with all his or her worldly and natural desires into account. Whereas other spiritual traditions were teaching that the desire for material pleasures, natural desires, and spiritual aspirations was mutually exclusive, suddenly there was an alternative path that was promising a way to avoid an internal tug of war between spiritual practices and natural desire and the resulting culmination of guilt and condemnation.

Indeed, the idea of weaving together all threads of life in accordance with the bright and colorful pattern of nature; embracing all natural elements, including sex, was an appealing proposition to many who felt torn between spirituality and life.

It’s these teachings that became known as Tantra. This path is systematic and comprehensive, but not rigid. Right from the beginning, Tantra has held a degree of fluidity as it embraces the various threads of life and looks to change everyday experiences into blissful, transformative experiences.

There is diversity within Tantra, but there is a common set of spiritual practices that define it. Essentially, Tantra is a spiritual science, independent of any particular religion, but accepting of and adaptable to all.

The commonalities that defined Tantra in history and today include:

How we can define Tantra today

While, today, there is an eagerness and emphasis placed in the media on the sexual practices and rituals of Tantra, there is some debate as to the prevalence and importance of sexuality in the teachings of embodied mindfulness and in the rituals of classical tantra, as many classical manuscripts have been lost.

However, there is no doubt that Tantra has been present for centuries: temple architecture that survives provides interesting insight into this. The temple architecture of Vajrayana Buddhism, a form of Tantric Buddhism, is rich with visual art of the lingam (penis), the yoni (vagina), and deities locked in sexual congress.

The original teachings of tantra largely died out in the 12th century as Islam arrived in India. However, while Tantra’s hold and popularity were diluted, and for the best part disappeared, its teachings were preserved through three different schools:

It is through these three schools that the teachings, rituals, and practices were conserved — allowing it to spring back into popularity with great vigor and vibrancy.

Today, there is renewed interest in the teachings of Tantra, especially in the Western world. Modern Tantra is inspired by the classical teachings, including an emphasis on rituals, a focus on the teachings and personal transmissions of a spiritual teacher. There is an openness and embracement of all individuals regardless of, religion, gender, nationality and sexual orientation.

Tantra has been reborn and while some may argue that modern Tantra is not a true reflection of the classical teachings, it must be seen that Tantra has survived by embracing change and accepting other modalities. You could argue that it’s this adaptability which is at the heart of all tantric teachings.