How to Solve Problems 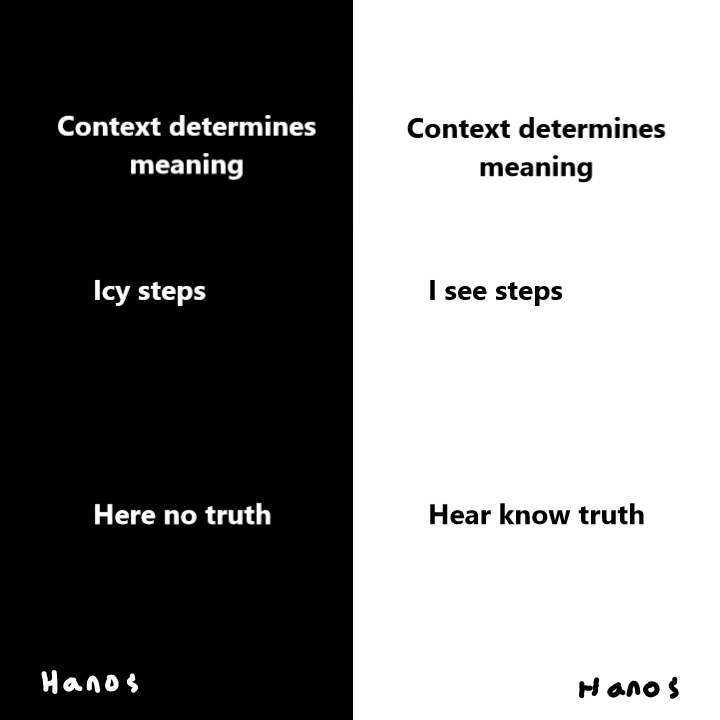 It makes sense I suggest, to understand what a problem is in general, as well as a particular problem you my have about a specific matter.

Problems with an emotional component can be seen as stuck energy that is moving in a circle, which is why you often find that people repeatedly state their problem and why you may recall you do that yourself sometimes.

What the problem needs is a channel for the energy to move out of the circle and flow elsewhere, in much the same way that an electrical potential is discharged by reaching the earth and is the rendered harmless.

This is often achieved by seeing the same situation in a different way, which is why my cartoon playing on the meaning of words and headed, context determines meaning, is making a point that has a far wider relevance to our lives than at first appears.

There is a very old story, told by Jesus, that makes the point well – whether or not you have any kind of faith. A poor woman put a desultory sum of change into the offerings box that supported the running of a synagogue in contrast to the large monies put in ostentatiously by a number of wealthy attendees. Jesus, however, said that she put in more than all the others as she put in all that she had, while the rich guys didn’t miss what they put in and were really seeking other’s adulation.

The facts all looked and felt different when that was understood.

In my own life, it wasn’t easy dealing with my marriage ending unexpectedly after 30 years. Then one day I thought, ‘when my former wife ended our marriage suddenly after 30 years she was being honest and true to herself.’ When I looked at it that way, it all felt different. I value honesty and being true to yourself and I felt, ‘well, if that is how she felt, she did the right thing for her and for me.’ That energy that had been troubling me, moving in circle, now had somewhere to go and I felt healed.

Consequently, if you find yourself chewing over the same problem again and again, start to see that this solves nothing and what you need is some way or some understanding or some experience that will release the energy from the circle. And one tip here is to look for some new questions about your problem. For example, if it concerns another person, try to think of some good reasons why in their mind they might have treated you in the way they did.

I am all for doing what ever helps, which is why I am writing about this mental approach in a blog on bodywork!  A mind-based approach isn’t easy and its other limitation is that it can be slow to achieve and not shift all that we are needing to sort out. That is precisely the reason that we have so many problems.

The bodywork in Tantric Journey East Midlands, which I offer in Grantham and London, is the most effective tool that I have seen for resolving problems. In some cases, we are aware of an issue but don’t know how it started, so mind really is a no help because the cause isn’t available for mind to find. With Tantric Journey we reach to where problems are stored, whether or not you know the cause. This is why it is such a deep work.